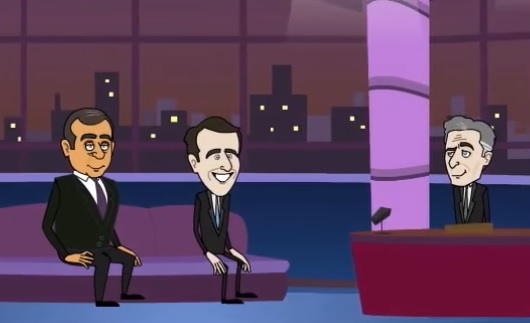 Steve: So, tell us about your expedition. I’ve heard it was very dangerous.

Paul: Our expedition up Mont Blanc had been plagued by difficulties from the start. We had just decided to make a last-ditch attempt for the summit when we noticed that the weather was deteriorating.

Eric: Yes, after much discussion we decided that we should cut our losses and return to the base camp. Little did we realise though, that the worsening weather conditions were just the tip of the iceberg. As we were approaching the half-way point, we realised that a large part of the cliff face had vanished into thin air, taking with it the narrow path we had used on our way up.

Paul: It was at this point that several less experienced members of the team started to panic and it looked as though the situation might get out of hand.  I knew we would not have a hope in hell if we all stayed there waiting for a rescue party to come and lend a hand. So I told our terrified colleagues to sit tight while three of us attempted to climb down the mountain.

Eric: We suffered our next close call about three quarters of the way down when our rope snapped, leaving us clinging to the rock. We had two choices. We could stay there and freeze to death or we could attempt to descend without ropes. We decided to chance it and climb down.

Paul: Three hours later we reached base camp. From there we were able to inform the mountain rescue service of where the others were and before nightfall they too were safe.